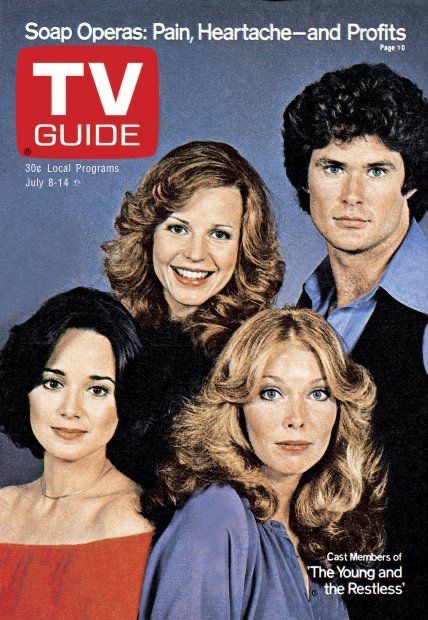 Newlyweds Lance and Lorie quickly sped through the honeymoon stage of their marriage and found themselves saddled with a major problem. Surprisingly, it wasn’t Vanessa and her jealous feelings towards Lorie. Instead, it Lance’s wayward brother, Lucas, who had a talent for stirring up trouble and an eye for the ladies. He showed up unannounced on their doorstep one day and immediately began creating havoc.

Meanwhile, Lorie attempted to build a relationship with Vanessa and even suggested that she have facial surgery for her burns. Vanessa, however, wasn’t interested in accepting Lorie as her daughter in-law, despite Lorie’s interest in correcting her disfigurement. When Vanessa discovered that Lorie’s new novel, “In my Sister’s Shadow,” chronicled her sister Leslie’s nervous breakdown, she seized upon the opportunity to undermine Lorie. While Lorie was promoting her book, word leaked out, thanks to Vanessa, that it was actually an autobiographical account of her troubled relationship with her sister, Leslie. Soon after, Leslie, who was on a grueling concert tour, found herself hounded by reporters anxiously seeking tawdry details about her nervous breakdown. Leslie became so upset at being hurled into the frenzied media’s harsh spotlight that she nearly suffered a second breakdown. When Lance heard what Lorie had done, he lashed out at her and then flew to meet Leslie and lend her emotional support. Leslie’s family was also concerned for her well being. Leslie decided to cancel her tour, but with Lance’s support, she slowly regained her confidence and resumed performing.

One evening, after a successful performance, Lance and Leslie returned to her hotel suite, where they ended up making love. The following morning, Leslie felt so guilty about their one night encounter that she encouraged Lance to patch things up with Lorie. Soon after, Leslie discovered their lone night of lovemaking had left her pregnant. Rather than risk destroying Lance and Lorie’s marriage, Leslie didn’t tell Lance that she was pregnant with his baby. Lucas, who had fallen in love with Leslie, because of her kind nature, sympathized with the position she was in and proposed marriage. Leslie appreciated Lucas’s concern for her and gradually developed feelings for him. She accepted his proposal and they married.

Jill gave up her hopes of winning back Derek and orchestrated an elaborate campaign to seduce her mother’s boyfriend, Stuart Brooks. Jill didn’t care that Stuart was already romantically involved with her mom, Liz, because Jill was primarily driven by a desire to provide her son, Phillip, with financial security. Initially, Stuart resisted Jill’s advances. But when Jill stepped up her efforts, Stuart eventually spent a weekend in Vegas with her. Soon after, in a sly attempt to trap Stuart into marrying her, Jill announced that she was pregnant. Stuart agreed to marry Jill, even though he was in love with Liz, who was heartbroken by the news. Shortly after the marriage, Jill accidentally tumbled down a flight of stairs. At the hospital, Stuart questioned Jill’s doctor about the impact the accident would have on Jill’s pregnancy. Bewildered, the doctor announced that Jill wasn’t pregnant. With Jill recuperating in a nearby hospital bed, Stuart suddenly realized that she had conned him into marrying him. When Stuart told Jill that he wanted a divorce, Jill refused.

Derek’s ex-wife Suzanne Lynch arrived in Genoa City, determined to win him back. She pretended to befriend Katherine and then supplied her with candy that was laced with a mind-altering drug. When Katherine began acting bizarre, Derek committed her to a sanitarium. Suzanne continued her dastardly scheme by sending a box of the candy to Katherine at the sanitarium. Katherine’s roommate ate some of the candy and, in a psychotic state, set fire to their room. Katherine’s roommate died in the fire and her body was burned beyond recognition. It dawned on Katherine that she had been set up by Suzanne. Thinking quickly, Katherine devised a scheme to punish Suzanne. Katherine slipped her wedding ring onto the corpse’s finger and led everyone to believe that she had died in the fire. Then, Katherine began “haunting” Suzanne. It seemed that everywhere Suzanne turned in the Chancellor mansion, she saw Katherine. Feeling tormented by what she had done to Katherine, Suzanne went temporarily insane and repented her actions. With Suzanne and Katherine both out of the picture, Jill realized that Derek was free to marry her. She hastily divorced Stuart and arranged to marry Derek. Soon after, Jill and Derek had a surprise guest at their wedding–Katherine.

Meanwhile, Stuart and Liz married. Jill found herself without a man or financial support. And Liz, who had supported herself as a housekeeper, found it difficult to adjust to her new life as the wife of a successful newspaper publisher.

Separated from Chris, Snapper fell for Casey, a fellow doctor who worked at the clinic with him. Their relationship was troubled from the start because Casey suffered from a fear of sex. She was also worried about her kid sister, Nikki, who was a promiscuous teenager. When Nikki and Casey’s mother were killed in a car crash, their father, Nick, returned to Genoa City. Seeing her father again, Casey suddenly remembered a traumatic incident that had been buried deep in her subconscious. When she was a child, Nick raped her. When Casey, accompanied by her friend Brock, went to confront Nick, he was in the process of trying to rape Nikki. During Nikki’s struggle to defend herself, she accidentally killed her father