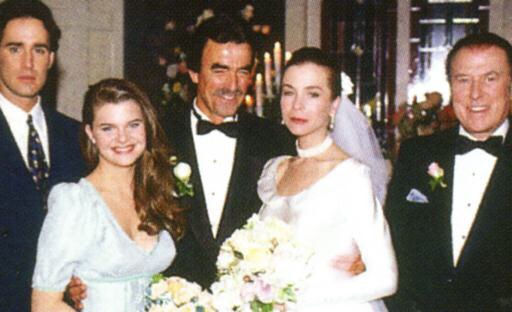 -Nick Newman (aged as a teen)

Victor Newman and Nikki were shocked to learn that the daughter, Victoria, and Cole Howard had eloped to Vegas in early 1994. Upon their return, Victor revealed that Cole was his son, which forced an annulment. While going through the late Eve Howard’s belongings, Victor discovered a letter from another man to her, which cast doubt on Victor being Cole’s father. Victor immediately arranged to have blood tests run on Cole, the other man and Eve’s corpse. When Nikki tried to resume her romance with Cole, a devastated Victoria left town before she had learned that Cole wasn’t interested in her mom.

Receiving confirmation that he wasn’t Cole’s dad, Victor and Cole immediately tracked Victoria down. Cole shared Victor’s news with Victoria and they returned to Genoa City, where they arranged to remarry. When Victoria had discovered that Cole and Nikki had once been intimate, she had traveled to New York City and had agreed to pose for a nude centerfold. The publisher had promised Cole that the photos wouldn’t run. Nevertheless, a few months later, Victoria’s shocking centerfold was on newsstands around the country. Angered by the publisher’s unethical behavior, Victor bought every existing copy of the magazine and had them destroyed. He then purchased the company that published the magazine and fired the publisher. Rather than attend college, Victoria opted to take a job at Jabot, working with Ryan.

Hope revealed to Victor that she had never been with a man sexually. Soon after, she and Victor made love. When Victor proposed marriage to her, Hope accepted. Nikki was so distraught by the news that she crashed their wedding and made a spectacle of herself. Nikki considered reconciling with Jack, but he surprised her by announcing that he was ready to file for divorce. Meanwhile, Hope learned that she was pregnant. Victor and Hope were forced to do some serious soul-searching when Hope’s doctor said the baby could inherit her blindness. When medical tests revealed that there was a good chance the baby would be born blind, Victor urged Hope to have an abortion, but she resisted, and the tension in their marriage escalated.

Victor and Nikki’s son, Nick, returned from his Swiss boarding school for the summer. After becoming interested in an attractive young woman named Sharon, Nick decided to stay in Genoa City. Meanwhile, Sharon’s friend, Amy, was also interested in Nick. Eventually, Nick and Sharon began a romance, which angered Sharon’s former boyfriend, Matt. Sensing the closeness between Sharon and Nick, Sharon’s mom, Doris, warned her daughter not to make the same mistake twice and become pregnant again. Still hurting over the pain of giving her first baby up for adoption, Sharon resisted Nick’s attempt to make love. Stung by Sharon’s rejection, Nick turned to Amy for physical comfort. When Doris was hospitalized after falling from her wheelchair, Victor relieved Sharon’s financial worries by taking care of Doris’ hospital bill.

Paul and Christine grew closer after Danny sent Christine a letter from New York, announcing that he wanted a divorce. Heartbroken, Christine resolved to get her life on track by following Danny’s wishes. When her divorce was finalized, Christine resumed her maiden name of Blair. Eventually, Christine learned that Danny had gotten another woman, Phyllis, pregnant. Before their son, Daniel, was born, Danny reluctantly married Phyllis. Soon after, they moved to Genoa City.

Paul’s former wife, April, returned to Genoa City after being beaten by her husband, Robert, over the holidays. Although April was still attracted to Paul, he gently turned her down. Concerned for her daughter, Heather, April returned to Robert. When he threatened Heather’s well-being, April fatally stabbed him with a letter opener. April was charged with murder. To her relief Christine Blair and John Silva volunteered to represent her in court. Christine and Silva’s dynamic representation won April a suspended sentence. After being reunited with Heather, April announced to Paul that she wanted to begin a new life away from Genoa City. Paul’s relationship with Christine heated up and he eventually proposed marriage. But Christine resisted giving Paul an answer because she was still trying to accept the news about Danny’s marriage to Phyllis.

Alex “Blade” Bladeson and Ashley married. While their house was being built, they moved into the Abbott home. Complications quickly developed when Blade’s former lover, Mari Jo, moved to Genoa City. Blade was troubled when Mari Jo became involved with Jack Abbott and secured a job at Jabot. After Mari Jo also befriended Ashley, Blade told her to leave town or he would reveal the truth about her to Jack. But Mari Jo forced Blade to back down when she accused him of being responsible for the death of his twin brother, Rick. Blade realized that Mari Jo was going to become a permanent part of his life when she announced her engagement to Jack. However, Ashley accidentally discovered Mari Jo’s true identity and confronted the woman about her past relationship with Blade. No one was more shocked than Mari Jo when Blade’s presumed-dead twin brother Rick showed up in Genoa City.

Christine became friends with the owner of restaurant called the Saigon Shack, run by a Vietnamese woman named Luan. Luan hadn’t seen her son, Keemo, for years because he still lived in their native country. When Luan was shot by robbers at the restaurant, she pleaded with Christine to find her son. Christine and Paul immediately traveled to Viet Nam, where they found Keemo and brought him back to Genoa City. After a tearful reunion, Luan recovered from her wounds. Keemo moved in with his mom, and her daughter Mai. Through a series of events, Christine deduced that Jack had been Luan’s lover while he was a soldier in Viet Nam, and had fathered Keemo. With Christine’s assistance, Jack and Luan were reunited. Luan told Keemo that Jack was his father, which angered Keemo, because he had always believed that his American father had deserted Luan. When Keemo learned that Jack and Luan had been separated by the war’s ending, he accepted Jack as his father. However, Mari Jo wasn’t pleased to learn of Luan’s new role in Jack’s life.

Olivia was hospitalized with a mystery ailment. During her hospitalization, Nathan took custody of Little Nate. Olivia’s mother, Lillie Bell, snuck into Nathan’s apartment and took the boy to Olivia at the hospital. After a healthy Olivia was released from the hospital, she and Nathan reconciled. Meanwhile, Lillie Bell resumed living with her husband, Walter.

Dru was surprised to discover that Neil had a half-brother named Malcolm. Neil explained that he had distanced himself from his brother, who was a trouble-maker. When Malcolm arrived in Genoa City, he informed Neil that he had reformed his bad-boy ways. Dru befriended Malcolm, which led him to believe that she was attracted to him. Dru was groggy from over-medicating on cold medicine when Malcolm stopped by checked on her for Neil, who was away on a business trip. Dru mistook Malcolm for her husband and made love to him. Initially, Malcolm believed that Dru recognized him. Later, Malcolm told Olivia what happened. When Dru announced to her sister that she was pregnant, Olivia told her that she had slept with Malcolm and that he might be the father of her baby. Dru considered having an abortion, but when her doctor revealed that she wouldn’t be able to have another pregnancy, Dru changed her mind. Rather than learn the truth about the baby’s paternity, Dru resolved to keep the incident secret from Neil, and assumed that he was the father.

Nina informed Ryan that she was pregnant, which prompted him to marry her. Soon after the wedding, Nina miscarried. Nina worried that Ryan would want to end their marriage, but he made it clear he wanted to continue being her husband.

Brad Carlton sought legal help after Traci refused to let him see his daughter, Colleen. The judge ruled that Brad could have supervised weekly visits with Colleen in New York until after the case was reviewed. While Brad was in New York, Traci phoned him at his hotel. She was angered when Lauren answered the phone. Traci tried to prevent Brad from seeing Colleen, but the judge ordered her to bring the child to Genoa City for bi-monthly visits. After making love to Lauren, Brad suffered a heart incident, which forced him into temporary hospitalization. Worried about Brad’s health, Traci risked her marriage to Steve Connelly so that she be with Brad. After Brad recovered, he made it clear to Traci that there was no chance for them to reconcile. Traci accepted the news and returned to her marriage in New York City. Lauren proposed marriage to Brad, but soon realized that he wasn’t interested in making a lifetime commitment.

John Abbott was too embarrassed to tell Jill that he was suffering from impotence. Feeling rejected and shut out, Jill started an affair with Jed Sanders, the contractor who was making improvements on their home. To Jill’s dismay, Mamie discovered the affair. To protect John, Mamie told him about the affair. Meanwhile, Jed also began seeing Nikki. When Nikki learned of Jill’s affair with Jed, she broke off their romance. Soon after, Jed left town. John told Jill that he wanted a divorce and a bitter custody battle over their son Billy ensued. During the custody fight, the judge ruled that Jill could remain in the Abbott house.

Katherine Chancellor’s maid Esther fell for a con man named Norman Peterson after she answered his ad in the Chronicle’s personals column. After a whirlwind romance, Esther married Norman and he moved into the Chancellor estate. Norman’s primary reason for getting involved with Esther was so that he could rob Katherine. While Norman was trying to break into Katherine’s safe, he was interrupted by Katherine’s husband, Rex. Startled, Norman shot and killed Rex. The police apprehended Norman and arrested him for Rex’s murder.