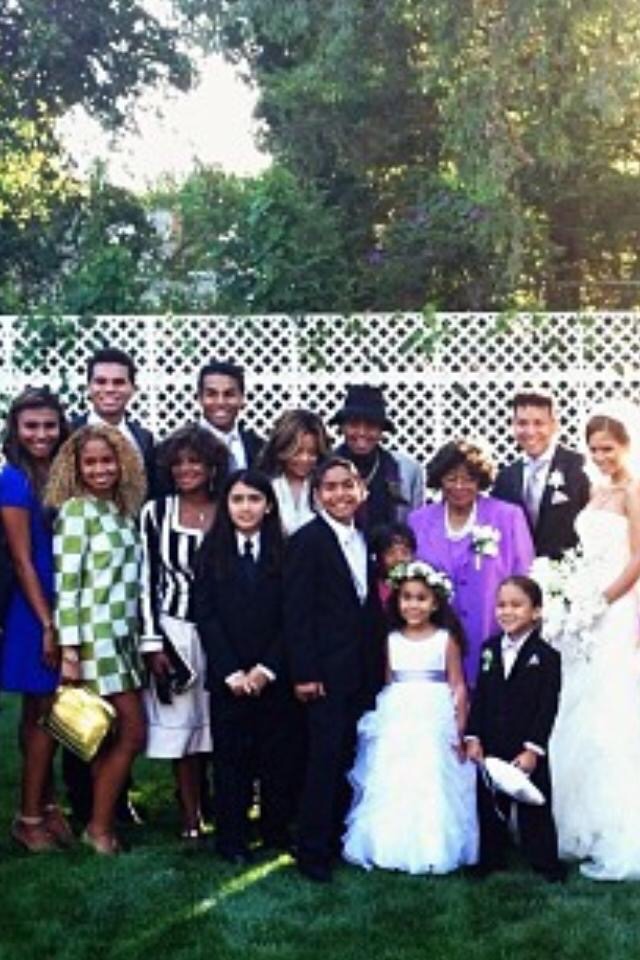 January 03 : Janet has lunch with Preston, her make-up artist in L.A.

January 20 : Janet is spotted at the Pear Gala at the Mandarin Oriental in Washington DC with brother Randy (an inaugural party for President Obama).

Late January : Janet stays in Paris and spends time with Wissam and her brother Jermaine who’s in town.

February 13 : Prince celebrates his 16th birthday with family and friends.

February 19 : Janet flies from L.A to Milan with Joey & Preston.

February 21 : Bigi celebrates his 11th birthday with family and friends.

In their first joint statement as a couple, Janet Jackson and Wissam Al Mana confirm the news exclusively to ET, saying, “The rumours regarding an extravagant wedding are simply not true. Last year we were married in a quiet, private, and beautiful ceremony.”

February 27 : From Ian Cross’s Facebook page : “After a couple years taking care of business away from home, I can’t tell you how good it feels to be back in my own place. Back in La. Back to making records. Janet Jackson and I are making a killer right now. Best of all, back to sleeping in my own bed.”

March 18 : LaToya is a guest on the Jimmy Fallon Show in NYC.

March 19 : LaToya is a guest on The Wendy Williams Show.

March 21 : Prince & Paris give video depositions for the AEG Trial.

April 03 : Paris celebrates her 15th birthday with family and friends.

April 10 : LaToya is a guest on ‘Good Morning America airing on the ABC Television Network.

April 18 : Katherine attends a family meeting at Janet’s house in Beverly Hills to discuss the upcoming AEG trial with Janet, Jermaine, Randy & Rebbie among others.

April 20 : LaToya attends the screening of ‘Dancing in Jaffa’ during the 2013 Tribeca Film Festival at AMC Loews Village 7  in New York City.

“Life With LaToya ” Season 1, Episode 2 titled “A Message from Michael” is aired on Own. In this episode LaToya visits Hayvenhurst.

April 23 : LaToya is a guest on The Wendy Williams Show.

May 9-10 : Karen Faye testifies for Jackson VS AEG Trial.

May 16 : Janet celebrates her 47th birthday with Wissam in Paris.

May 18 : In a new interview to Billboard about the 20th anniversary of the “Janet” album Janet reveals : “I am working on a new project now. We are creating the concept and initial thoughts on the music. I am excited about the direction we are taking. I don’t want to rush it”.

“Life With LaToya ” Season 1, Episode 6 titled “Adventures in Babysitting” is aired on Own.

May 28 : Janet along with Katherine & Rebbie attends court today in L.A for Michael’s wrongful death trial against AEG.

June 01 : From Ian Cross’s Facebook page : “Music has taken me to some crazy places but I never thought it would bring me here. This is Doha, the capital of Qatar. It occupies the Qatar Peninsula on the northeasterly coast of the much larger Arabian Peninsula. Its sole land border is with Saudi Arabia to the South, with the rest of its territory surrounded by the Persian Gulf. It’s home for the next few weeks. Qatar is kinda like the Switzerland of the middle east. Very peaceful and neutral in it’s politics. They are a very kind, thoughtful people. And quite frankly, too rich to think about becoming suicide bombers. Janet and I always talked about getting away from it all and recording in paradise. Given her new husband is from Doha we packed up a studio, rented a villa on the beach and came here to make music. I know, I know. I’m one lucky bastard.”

June 03 : Janet has signed up as the face of a new campaign for the United Nations Children’s Fund (UNICEF) to help stamp out starvation in Africa.

June 05 : From TMZ : Paris was rushed to the hospital early Wednesday morning, and sources tell us it was a suicide attempt.

Paris was taken out of her Calabasas family house on a stretcher at around 2 AM and taken by ambulance to a nearby hospital.

The 911 call came in at 1:27 AM.  We’re told the caller reported a possible overdose, although a source connected to the emergency response said there were multiple cuts on one of her wrists.

On Tuesday night … Paris posted some cryptic tweets, including, “I wonder why tears are salty?” … and “yesterday, all my troubles seemed so far away now it looks as though they’re here to stay.”
A source connected to the family tells TMZ … Paris “threw a fit” last night after she was told she couldn’t go to a Marilyn Manson concert.  We’re told she ran into her room screaming and slammed the door.

June 06 : Janet & Wissam host a birthday dinner for producer Tommy Parker with Ian Cross in Istanbul, Turkey where they are currently working on Janet’s new album.

June 19 : Paris and Prince Jackson made their first appearances in the wrongful death trial against their father’s last concert promoter.
AEG Live lawyers played short video clips from the depositions of Michael Jackson’s oldest children in court to counter testimony from their chef. The first clip shown to jurors was an answer to a question by AEG Live lawyer Marvin Putnam about former Jackson nanny Grace Rwaramba, who was fired two months before Jackson’s death.
“My dad didn’t like her, so he tried to, like, keep her away from us,” Paris said. “So he sent her on errands a lot.”
Her father was reluctant to fire Rwaramba because “he felt bad because she didn’t really have a lot of money,” she testified.
“He said she was sneaky and she wasn’t an honest person and she lied a lot,” Paris said.
Paris related an incident that happened when she was “really young.” She prefaced the story by saying it was “real creepy” and “this is going to freak you out.”
The nanny would sneak into a doctor’s hotel room and “he’d wake up and she’d be in his bed,” Paris said. “So, yeah, it’s kind of creepy.” It was unclear whose bed Paris was referring to since it was an isolated clip played without context.
Putnam asked her why her father didn’t just make the nanny stay away. “He sent her to India to get some stuff,” Paris said. “She kept coming back.”

July : Paris is transferred from the UCLA Medical Center to the Diamond Ranch Academy boarding school in Hurricane, Utah

August 10 : Janet & Wissam are spotted at the Four Seasons Restaurant in Doha.

Randy Jackson on Twitter : “There is no reason to play my deposition on video. I am ready and willing to testify. I dont understand why AEG would lie to the judge and say I didn’t want to testify in person”.

August 20 : Randy Jackson last words on Twitter : “I dont like that Paris is still in this facility. It’s not right. She’s been there much too long. She is not psychotic . There is no reason for her to be in a psychiatric hospital this long away from her family. There’s something more to this there’s something going on I don’t like it I’m afraid for her”.

August 29 : Janet is spotted shopping for abayas at Village Mall along the Jumeirah Beach Road in Dubai.

September : Bangladesh submits tracks to Janet and his producing partner/friends Reece Beats tweets/Instagrams about it.

October 2 : A Los Angeles jury on Wednesday found that concert promoter AEG Live was not liable for the death of Michael Jackson, capping a marathon civil trial that laid bare the troubled singer’s health problems, struggles with drugs and fateful attempt at a comeback tour.

Jackson’s family filed the lawsuit, claiming that AEG’s was to blame for the King of Pop’s death because it was negligent in the hiring and supervising of the doctor, Conrad Murray. AEG argued that Jackson had a history of abusing drugs, including the anesthetic, and was responsible for his own death.

The outcome marked a decisive victory for AEG. The jury was left with five questions that it had to answer affirmatively in order to find AEG liable. The jury agreed with the first question, that AEG hired Murray. But it rejected the second question, which asked whether Murray was unfit or incompetent. That finding made the rest of the questionnaire moot.

The Jacksons wanted AEG to pay his children, Prince, Paris and Blanket, $85 million each and his mother, Katherine, at least $35 million.

Katherine Jackson stared ahead stoically as the verdict was read. She was quickly whisked into another courtroom, where she exited at the back of the downtown L.A. courthouse.

November 27 :  Prince & Blanket spend pre-Thanksgiving dinner at Calabasas with most of the cousins. Paris stays at the Diamond Ranch Academy in Utah.

December 18 : Janet is spotted the Zuma restaurant in Dubai.

Paris stays at the Diamond Ranch Academy in Utah.