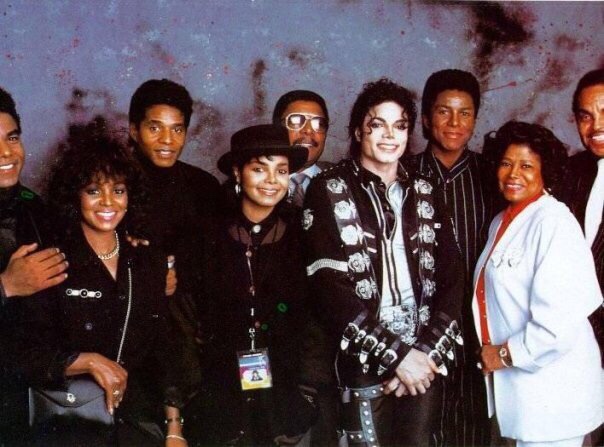 Some time later, Latoya leaves Hayvenhurst and goes to New York City with her manager Jack Gordon to work on her new album and upcoming concert in Atlantic City.

Michael shoots the “Speed Demon” short film which is a part of the “Moonwalker” movie.

January 30 : Katherine, Joe, Janet & Rene attend the American Cinema Awards at the Beverly Hilton Hotel in Beverly Hills, California where Janet is presented with an award.

Early february : Michael takes Jimmy Safechuck and his family to Honolulu. They stay at Kahala Hilton Hotel for 3 days and they attend Pepsi Bottler’s Convention.

Michael invites Jimmy Safechuck and his parents to stay with him. He also takes them to Disneyworld.

On the last day of preparation, Michael allows 420 school pupils to watch him rehearse.

Some footage is aired on Entertainment Tonight & Michael gives a short interview to Mary.

February 6 : “Man In The Mirror” is released as the 4th single from “Bad” along with a video in which Michael does not appear. It will peak at #1 on Hot 100 Billboard.

February 23+24 : Michael kicks off the US leg of the Bad Tour at the Kemper arena in Kansas City (Missouri)

March 1 : In NYC, Michael attends a press conference arranged by Pepsi to preview “The Chase” a new Pepsi commercials featuring Michael (a four part story) and to present a $600 000 cheque to The United Negro College Fund.

March 2 : At the 30th Grammy Awards at Radio City Music Hall in New York , Michael fails to win any awards for “Bad”. He makes an amazing performance of “The Way You Make Me Feel” & “Man In The Mirror” and gets a standing ovation from the whole industry. During the telecast, “The Chase” is premiered.

March 3+4+5+6 : Concerts at the Madison Square Garden in New York City. During the show, Tatiana Thumbzten replaces Sheril Crow on The Way You Make Me Feel and kisses Michael on the mouth! Siedah Garrett sings I Just Can’t Stop Loving You with Michael & Steve Stevens plays electric guitar on Dirty Diana!

Michael invites Dominic, Connie, Frank & Eddie Cascio to the concerts and he spends time with them at the Hemsley Palace.

March 9 : Michael attends a performance of “The Phantom Of The Opera” with Jimmy Safechuck, his mother & Liza Minnelli in NYC.

March 10 : Michael is honoured by the United Negro Colege Fund as one of their highest contributors at the 44th annual anniversary dinner held at the Sheraton Hotel in NYC .

March 18+19 : Concerts at the Market Square arena in Indianapolis (Indiana)

March 20 : Concert at the Freedom Hall in Louisville (Kentucky).

Michael is on the cover of Jet Magazine.

March 23+24+25 : Concerts at the McNichols Sports arena in in Denver (Colorado)

March 27 : The single “You’re Gonna Get Rocked!” is  released throughout the U.S., Europe, and Canada. It will peak at #103, barely missing the Billboard Hot 100. Latoya shoots a music video for this song.

April 14 : The video for “Dirty Diana” is premiered on MTV. It was filmed in Long Beach ( California )

April 19+20+21 : Concerts at the Rosemont Horizon in Rosemont (northwest of Chicago) where Michael is presented with the keys to the city by mayor Eugene Sawyer.

May 4+5+6 : Concerts at the Met Center in Minneapolis (Minnessota) which end the first leg of the tour.

May 5 : “Get It”, the duet between Michael & Stevie Wonder tis released. Michael does not shoot a video.

Mid May : Michael moves out of Hayvenhurst to his recently purchased ranch in the Santa Ynez Vallez. He bought the Sycamore Ranch for $17 millions dollars and soon renames it Neverland Valley Ranch.

May 16 : Michael is on the cover of Jet magazine.

May 18 : Michael’s movie “Moonwalker” is previewed at the Cannes Film Festival in Cannes, France. Michael does not attend the preview.

May 19 : Michael arrives in Rome, Italy, and stays at the Lord Byron Hotel .

May 21 : Michael visits the Sistine Chapel in the accompanied by US Ambassador Maxwell Rabb.

May 22 : Michael visits sick children at an hospital in Rome.

May 23 : Michael kicks off the European leg of the Bad Tour at the Stadio Flaminio in Rome.

May 25 : Michael is the guest of honour at a party held at the house of film director Franco Zeffirelli.

May 29 : Concert at the Stadio Olimpico di Turino in Turin, Italy.

June : Michael is on the cover of Ebony magazine.

“Michael Jackson : The Legend Continues” is released on home video.

June 2 : Concert at the Praterstadion in Vienna, Austria.

June 5+6+7 : Concerts at the Feijenoord stadium in Rotterdam, Holland.

June 11+12 : Concerts at the Eriksberg in Gothenburg, Germany.

June 17 : While in Basel , Michael meets the Charlie Chaplin family at The Manoir de Ban, a manor house located at Corsier-sur-Vevey on the banks of Lake Geneva in Switzerland.

June 19 : Concert at the Reichstag Grounds in Berlin, Germany.

June 23 : Concert at the Stade de Gerland in Lyon, France.

June 27+28 : Concert at the Parc des Princes in Paris attended by Grace Jones & Johnny Halliday among others.

July 1 : Concert at the Volksparkstadion in Hambourg, Germany.

July 3 : Concerts at the RheinEnergieStadion in Cologne, Germany.

July 8 : Concert at the Olympiastadion in Munich, Germany.

July 10 : Concert at the Hockenheimring in Hockenheim, Germany.

July 11 : “Another Part Of Me” is released as the 6th single from “Bad” and features a live video taped during concerts of the Bad Tour in Paris & London. It will peak at #11 on Hot 100 Billboard

July 16 : Prince Charles Princess Diana attend the third Wembley concert. Michael meets the Royal couple backstage to present with a £150 000 cheque to the Prince’s Trust and another £100 000 cheque to the Great Ormond Street Children’s Hospital.

In the evening, a banquet is held in his honour at the Guildhall.

July 23 : Michael is on the cover of Hello magazine.

July 26 : Concert at the Cardiff Arms Park in Cardif, Wales.

The live video of “Another Part Of Me” is premiered.

August 7 : Concert at the Vicente Calderón Stadium in Madrid, Spain.

August 8 : Michael Is on the cover of Jet magazine.

August 9 : Concert at the Camp Nou in Barcelona, Spain.

August 11 : Concert at the Stade Charles-Ehrmann in Nice, France.

August 14 : Concert at the Stade Richter in Montpellier, France.

August 21 : Concert at the Talavera Wiesen in Wurzburg, Germany.

August 23 : Concert at the Werchter Festival Grounds in Werchter, Belgium.

Concerts at the Wembley stadium in London. Michael dedicates “I Just Can’t Stop Loving You” to Elizabeth Taylor.

August 29 : Concert at the Roundhay Park in Leeds, England, where 90 000 fans sing Happy Birthday to Michael!

September 2 : Concert at the Niedersachsenstadion in Hannover, Germany.

Latoya & her manager Jack Gordon attend the show with Katherine and visit Michael at his hotel later. It’s the las time Michael & Latoya sees each other until 2002!

September 4 : Concert at the Parkstadion in Gelsenkirchen, Germany.

Janet wins 2 MTV Video Music Awards but does not attend the ceremony.

September 8 : Michael is presented with an award for his seven sold out concerts at the Wembley stadium which gains him another entry in the Guinness Book Of Records. Katherine attends the presentation.

September 10 : Concert at the National Bowl in Milton Keynes, England.

September 11 : Michael performs his last European concert at the Aintree Racecourse in Liverpool, England, in front of 125 000 people!

September 12 : LaToya is a guest on german TV show in Munich.

Upon arriving they are greeted by all the ranch’s employees who welcome them led by Michael’s personal maid Bianca Francia & her son Jason.

September 23 : LaToya is a guest on The Last Resort with Jonathan Ross.

September 26+27+28 : Concerts at the Civic Arena in Pittsburg (Pennsylvania).

October 3+4/5 : Concerts at the Meadowlands Arena in Rutherford (New Jersey).

October 10+11 : Concerts at the Richfield Coliseum in Richfield.

October 23 : In a brief ceremony outside the old Motown Studio in Detroit , Michael presents Esther Edwards & Berry Gordy with a $125 000 cheque for the Motown museum.

October 25 : LaToya’s 5th studio album titled “LaToya” is released by RCA.”You’re Gonna Get Rocked!” is released as a single. The video is directed by Greg Gold. A huge promotion campaign followed in the fall of 1988, with LaToya performing the song live on many different TV shows worldwide.

November : LaToya poses for Playboy during a top secret photoshoot at Neil Simon Theatre in NYC.

November 13 : Concert at the Los Angeles Memorial Sports Arena in Los Angeles. Many members of the Jackson family attend the show. Michael cancels five concerts in Los Angeles due to illness. They are rescheduled for January 1989.

December 26 : “Moonwalker” is released in Europe cinemas but not in the US.

It is reported that Michael has been making compassionate visits to the bedside of David Smithee, a 12-year-old whose father set him alight alive!

December 27 : Michael and his entourage fly back home to L.A.