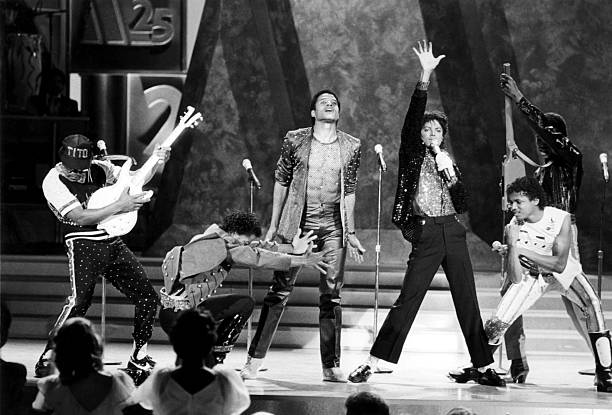 -January 1980 : Michael performs When You Wish Upon A Star and Ease On Down The Road in Disneyland for a Disney Channel Special celebrating the 25th anniversary of the Magic Kingdom.

Michael performs Rock With You & Don’t Stop Til You Get Enough at a UNICEF benefit concert which is broadcasted on TV.

-March 2, 1981 :  CBS airs a Diana Ross’s TV Special featuring Michael. Together, they perform Upside Down, Rock With You & Ease On Down The Road (with Quincy Jones on the piano).

-May 16, 1983 :  NBC broadcasts the two hour special Motown 25th: Yesterday, Today & Forever featuring for the first time since 1975, a performance of the six Jackson brothers for a medley of the Jackson 5 hits followed by a solo performance of Billie Jean during which Michael showcases his first ever public performance of the Moonwalk. At the end of the show, Michael joins Diana Ross and all the Motown stars on stage to pay tribute to Berry Gordy.

-January 27, 1986 :  At the end of the American Music Awards ceremony, Michael joins many celebrities including Diana Ross, Janet & LaToya to sing We Are The World.

-March 2, 1988 : At the 30th Grammy Awards at Radio City Music Hall in New York , Michael performs The Way You Make Me Feel & Man In The Mirror.

-November 13, 1989 :  Michael sings You Were There during the taping of the Sammy Davis Jr 60th Anniversary TV Special.