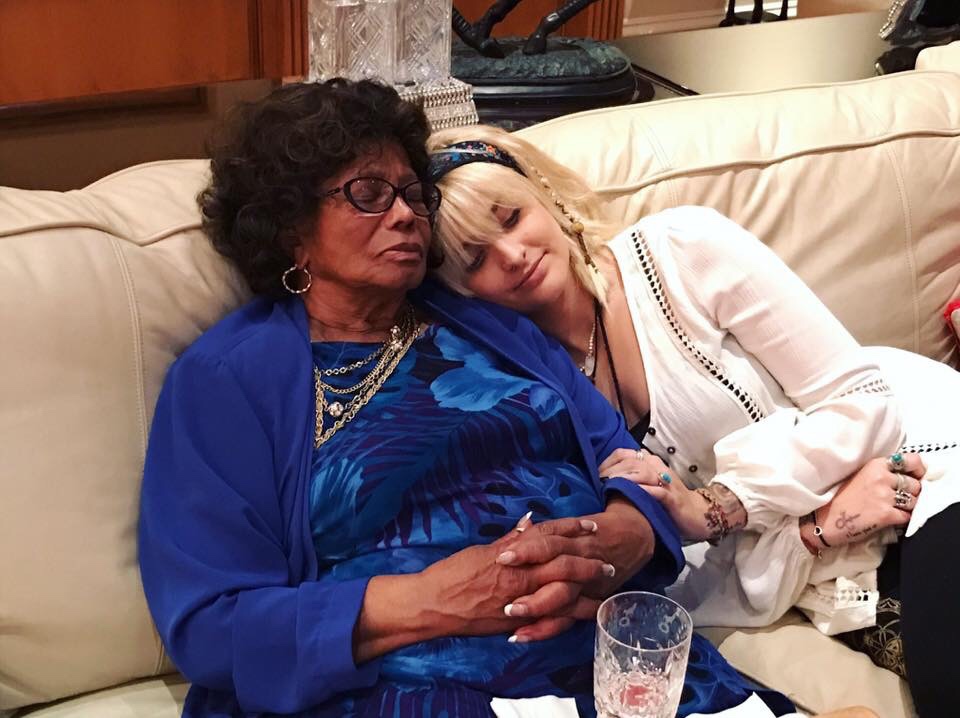 January 06 : It was Janet’s wish not to make any further comments about her health, however, because of the great concern from around the world, Janet will be releasing a personal message shortly. -Janet’s Team

Janet posts a message with the song “The Great Forever” to denie rumors that she has a throat cancer.

She reveals her doctors have approved her concerts to resume on March 30 in Europe.

Meanwhile she is recovering.

January 08 : Thank you for all your love. We’ve only just begun! See u in 2016 on Janet’s #Unbreakable World Tour! -Janet’s Team

In the past, Janet has visited the @MyMusicVIP museum when her schedule permitted. Janet has asked us to announce that now, in an expression of her gratitude for their loving support, music owners in Europe, will be invited to see and hear from Janet, after each show. After purchasing your copy of #Unbreakable, concert goers should visit MyMusicVIP.com to register as a member to gain access to this special event. -Janet’s Team

January 14 : “Hey you guys, I’m happy to let you know all the shows have been rescheduled. I can’t wait to see you! Xoxo”.

January 21 : Jimmy Jam : “She’s feeling a lot better. I think she, first of all, was so moved by the fans’ support and the prayers and everything, that meant a lot to her. She definitely keeps up with what everybody is doing. “I think she’s appreciating all of this and it definitely helped her recovery. I’m glad she now feels at the point where she’s ready to continue the tour because the tour is absolutely amazing.”

January 27 : Stay tuned! There will be messages today from #JTribe, direct from rehearsals for #UnbreakableEurope! -Janet’s Team

February 04 : “Hey you guys, thanks for 30 years of love for Control! I’m in Europe getting ready for #Unbreakable to start back up. See you soon! Xoxo”. #Control30.

Janet is in London where she is training and rehearsing with Tony Martinez and Whyley Yoshimura at the Pineapple Dance Studios in Convent Garden.

February 09 : “Hey you guys, I am preparing for my tour in Europe… Can’t wait to see you”.

February 10 : Janet is spotted shopping in London with Wissam & Joey.

February 12 : “Took a break from tour prep to attend 10th Anniversary of Lazarides Gallery n London with my sweetie… See you soon”.

In L.A, Prince celebrates his 19th birthday with family and friends.

The Jacksons “Art On Ice” performances

February 16 : Rolling Stone posts a video of Janet during the recording of Unbreakable with Terry Lewis & Jimmy Jam.

February 21 : Bigi celebrates his 14th birthday with family and friends.

February 22 : Janet posts a lyric video of “The Great Forever” on her You Tube channel.

She announces that she will perform at the Dubai World Cup on March 26.

February 24 : Janet is spotted in London with her personal trainer Tony Martinez.

February 26 : “Follow Janet’s playlist on @Spotify, see what she’s listening to ahead of her European tour!”

March 05 : Janet attends the Haider Ackerman Fashion Show in Paris and later she visits Hermes. She posts a video message for her upcomung performance in Dubai.

March 06 : In L.A, Gil starts rehearsing with the J Tribe.

March 08 : Ticketmaster announces that the whole european leg of the Unbreakable Tour is postponed! The performance in Dubai will go as planned.

Janet & Gil do not react officially.

March 10 : “You’re missing me, I’m missing you… I’ll be rescheduling our Unbreakable shows in Europe as soon as I can. Xoxo”.

March 23/24/25 : Janet & the JTribe rehearse for their upcoming performance in Dubai.

March 26 : Janet performs a full “Unbreakable”concert for the the closing of the Dubai World Cup horce racing series. Her brother Randy is the only family member who attends. It’s the last concert of the tour.

March 27 : Janet unveils her “Unbreakable” jewelry line during à private event at the Armani Hotel in Dubai with Preston.

March 29 : Paris posts a selfie of Grace Rwaramba & her on her social medias.

April 06 : In a video message posted on her social medias, Janet announces that she has to postone the remaining of her Unbreakable World Tour because she is “planning a family” with her husband and has to rest on Doctor’s orders. She insists that the tour will resume as soon as she can…

April 29 : Janet posts a gif from her upcoming “Dammn Baby” music video as a teaser.

May 05 : After a week of gif teasers on her social medias, Janet finally reveals the video for “Dammn Baby” on her You Tube page.

Multiple reports claim that Janet is pregnant with her first child even though she does not make any comment.

May 6  : « The estate of Michael Jackson could not be clearer — the deed that was recorded giving Katherine Jackson ownership of the family’s Encino estate is bogus to the core.

Attorney Howard Weitzman is scoffing at the deed TMZ first told you about … filed by Katherine which gives her 25% ownership in the home, and each of MJ’s 3 kids 25% as well.

Weitzman says it’s laughable that the person on the deed changing the title is Michael Jackson … who is utterly incapable of giving anything to anyone anymore. Weitzman says, “Michael’s estate owns the property for the benefit of his children and Mrs. Jackson has no ownership interest.”

As we reported, although Katherine signed a document attached to the deed, she may not be the mastermind, but Weitzman vows to hunt down the culprit.

May 16 : Janet celebrates her 50th birthday with Wissam. Many family & friends wish her happy birthday on social medias including Latoya and her niece Paris. On this special day she finds out that she is pregnant!

May 17 : “Hey you guys, thank you so much for all the beautiful birthday wishes. I felt so much love… You are so sweet! I love you all.” #Unbreakable

June 02 : New pics of Janet appear on line from a photoshoot for an upcoming cover story of Emeriates Woman magazine.

June 13 : Janet shares the behind the scene video of her photoshoot for Emirates Woman magazine on her You Tube page.

June 14 : Janet shares a fan made video of “Shoulda Known Better” in tribute to the Orlando mass shooting in a gay club.

-June 23 : From TMZ : Jermaine Jackson‘s wife is filing to divorce him and predictably … she says the trouble started the day she got busted for attacking him.

Halima Rashid filed the divorce petition on Tuesday, citing irreconcilable differences, and listing November 28, 2015 as the date of separation.

If that date sounds familiar it’s because TMZ broke the story … Halima was arrested for felony corporal injury that day. During a fight on Thanksgiving weekend, Jermaine allegedly spit on her and she allegedly bit him on the leg.

Halima is seeking spousal support. They got married in 2004, but don’t have any kids together … so no child support issues. She was wife #3 for Jermaine.

Her domestic violence case was tossed because prosecutors couldn’t determine who was the aggressor in the fig.

July 07 : Janet shares another fan made video of “Shoulda Known Better” in tribute to the “Black Lives Matter” movement.

July 28 : Janet is spotted with Wissam in L.A for the first time since announcing they’re expecting their first child.

August 11 : Rebbie and her daughters Yashi & Stacee are presented with the SAMHSA Special Recognition Award in Los Angeles.

August 14  : Anthony “James” Jackson II, has filed bombshell new court documents insisting that the singer’s will is invalid and executors have iced him out.

Anthony’s dad, Tony Jackson, was Michael’s first cousin. “When I was seven years old my father Tony passed away,” Anthony writes in the court documents f “Soon after this, the Decedent Michael Jackson stepped in and offered to raise me as his son, as a co parent with my mother Debra Jackson.” Even after Michael’s own children — Prince, Paris, and Blanket — were born, Anthony says he “continued to raise me as his son.”

According to Anthony, those intentions were “that I receive a living expense allowance, that all of my education would be paid for, that I would be able to purchase a home … and a vehicle, that I would receive enough funds to start my own business.”

Anthony alleges that Michael “also said I was the only one he would allow to use the SONY/ATV music publishing catalogs for any of my projects, for free.”

“I should have been receiving Decedent’s Michael Jackson’s intended inheritance for me. I request that I immediately receive [it],” he writes in the court documents, “and for them to be retroactive” from the singer’s death date, June 25, 2009.

In the 128-page filing, Anthony lays out a complicated argument for why he has been denied what he says is rightfully his. Simply put, he claims that the will is invalid, and there is a major “conspiracy” in place.

“I question if this will is authentic, especially since the Decedent Michael Jackson told me and my mother Debra Jackson in 2003, the will he was forced to sign in 2002, in my presence, no longer existed,” he alleges. “…I believe the will and the trust documents were never notarized and they have never been authenticated.”

In addition, Anthony insists, “The executors violated my rights and proper legal procedure because I never received the notice of probate … I believe not noticing me was a tactic by the executors to gain control of the estate, because I believe they knew I would question the authenticity of the will and object to their being the executors…”

“I believe the executors knowingly violated the trust laws,” the court documents claim, further alleging that they “… exploited the estate assets for personal profit, trustee compensation.”

It’s not the first time that Anthony has faced off against the Jackson family in court. In December 2013, he petitioned for guardianship of Paris, Prince, and Blanket, but was denied.

August 28 : Gil visits Janet at her Malibu home and they watch the VMA’S together.

September 08 : According to TMZ : Paris Jackson‘s alone and in charge … living in the back guesthouse at Michael‘s old Encino mansion.

Sources close to the family tell TMZ … Paris had been itching to cut the cord from living with her grandmother in Calabasas … where Blanket and several of her cousins also live. We’re told the family had security concerns about her living just anywhere, so it was suggested she use MJ’s old compound.

Michael’s estate controls all of his properties, meaning … technically, Paris needed permission to live there. We’re told she went to them, and pointed out she basically owns the crib as part of her trust — and the estate didn’t fight her.

As for why she’s in the guesthouse — the main house is being remodeled.

We’re also told Paris is living there completely on her own. She and bf Michael Snoddy recently posted pics from the backyard — he comes and goes, but does NOT live there.

September 10 : Preston visits Janet at her Malibu home for a photoshoot.

September 27 : Janet is spotted shopping in London with Joey. The day after the first pics of Janet being pregnant appear on line.

October 02 : On the 1st anniversary of the “Unbreakable” album Jimmy Jam gives an interview to the Kelly Alexander Show and says that Janet wants to finish the tour and will be back when she is physically and mentally ready.

October 12 : Janet officially announces her pregnancy in a short statement to People magazine and she shares the first official picture of her baby bump. Gil, Preston & Janet Zeintoun share the picture on social medias.

October 19 : Janet is spotted at a flower shop near Regent’s Park in North London.

October 20 : Janet & Wissam are spotted shopping together in London.

November 15 : Janet is spotted in London.

December 19 : Paris & Genevieve join the gang in Hawaii with their boyfriends.

December 24/25 : Prince, Paris, Bigi, Omer, TJ and the gang spend Christmas together at the Aulani Disney Resort & Spa in Kapolei on the Hawaiian island of Oahu.

December 31 : Prince spends New Year’s eve with Omer in L.A while Paris goes to New Jersey with her boyfriend to visit the Cascios.